A couple of months ago I received an Instagram message from a page called “Snapshots of Life After Loss”.

It simply said, “Hi, I just read your story on your blog. Wow. Thank you for sharing your story”.

From there we began a correspondence. Gracelyn explained that she ran a company called “The Luna Peak Company” with her aunt Melody. Their project interviews grievers across time to help those at the beginning of their grief journey have a sense of hope. Eventually they plan to publish a photography book featuring these stories.

Gracelyn explained that if I was ever in the Los Angeles area they would love to have me stop by for an interview and photo shoot.

As fate would have it, I planned to make a quick same day roundtrip drive to downtown Los Angeles and back (from my home in the Phoenix, Arizona area) the following month. I told Gracelyn about my plans and that I would let her know once I had details.

Upon looking at their website and Instagram page, I was impressed with the simplicity and candor of each snapshot. The participant is featured in two consecutive posts. One consisting of a written quote followed by a quick one-minute video of the interviewed responding to a specific question pertaining to their journey, truly capturing the essence of what grief looks like. I immediately knew that I needed to become involved with this project.

My plans to travel to Los Angeles started to take shape. My son Dylan is a graphic designer/artist. He had entered a contest to design artwork on a recycling bin to be displayed and featured at the Coachella Music and Arts Festival. Out of thousands of applicants, his “Juicy Fruit” piece was one of less than 50 to be selected.

Being the proud and supportive dad that I am, I told Dylan that once he completed his piece I would be happy to drive it to Los Angeles. It needed to be delivered to the L. A. Arts District where it was to be exhibited prior to being displayed at the music festival.

I reached out to Gracelyn to tell her of my plans. She cleared her schedule for me and gave me the address to a park in Sierra Madre, which was conveniently right along my path back home.

I explained that I only had a couple of hours to spend with her before I’d need to get back on the freeway (hopefully ahead of the notorious L.A. rush hour traffic).

Two days prior to our meeting, Gracelyn sent me the list of questions that she would be asking me. I decided not to look at the questions as I wanted my answers to be organic rather than rehearsed.

Gracelyn had suddenly lost her dad 3 years ago. She had started this project as a way to work through her own grief as well as a way of helping others.

First came the interview, followed by a photo shoot. The photo shoot consisted of several head shots, a handful of Polaroid shots, as well as some photos holding the one special memento that I was asked to bring. In my case I brought a special picture of Dana and I.

Being part of the same community and speaking the same grief language, Gracelyn immediately made me feel safe and comfortable to be candid and raw in my response to her questions.

Some of the questions were;

-Were there any turning points in your grief?

-What is something helpful or unhelpful that someone said to you?

-How do you celebrate her life?

-What do you wish others understood about your grief?

When I look at the complete list of questions that were asked, I can’t remember how I answered any of them. What I do remember is that with each answer Gracelyn nodded her head as if she understood exactly what I was saying. We were talking as survivor to survivor. A candid conversation between two people who deeply understand grief.

On the long drive home to Phoenix I thought a lot about how I know more about grief than I know about any other subject. More than the mortgage business, the grocery business, Dodgers baseball or alternative music. More than anything.

I have all this knowledge, but this session was truly the first time I had felt free enough to talk about it in such an honest, unrestricted way. Twenty-eight years and I had never had a conversation such as this. When I told Gracelyn this, she found it both sad and hard to believe.

The focus of others is instinctively to not bring up our loss or say the name of the person we lost because they don’t want to make us sad. But the opposite is true; when we are able to say or hear their name, there’s a sudden spark inside of our heart that only us survivors are able to understand.

It was only a few years ago that I started writing about my journey. Up until then, all this knowledge just sat there as daily conversations inside of my head.

It bothers me that I didn’t really help anybody during the first quarter century of my journey.

I can’t quite explain the magnitude of how fulfilling it is to finally be doing my part to help others facing a path similar to mine. Twenty-eight years ago I would have appreciated the opportunity to learn perspective from a journey such as mine. Back then I felt as if I was in a silo, with no support or community to be part of. Thankfully times have changed and we’re in an age where we have access to those who have become comfortable to share more freely. I am hopeful that with projects such as Snapshots of Life After Loss, we are getting closer to a time where talking about grief becomes normal, accepted and encouraged.

I was the 75th interview for Snapshots of Life After Loss. Thus far 5 have been featured on their Instagram page. So it may be a little while before any of my snapshots are shared. But whenever they are, I look forward to sharing them with all of you. 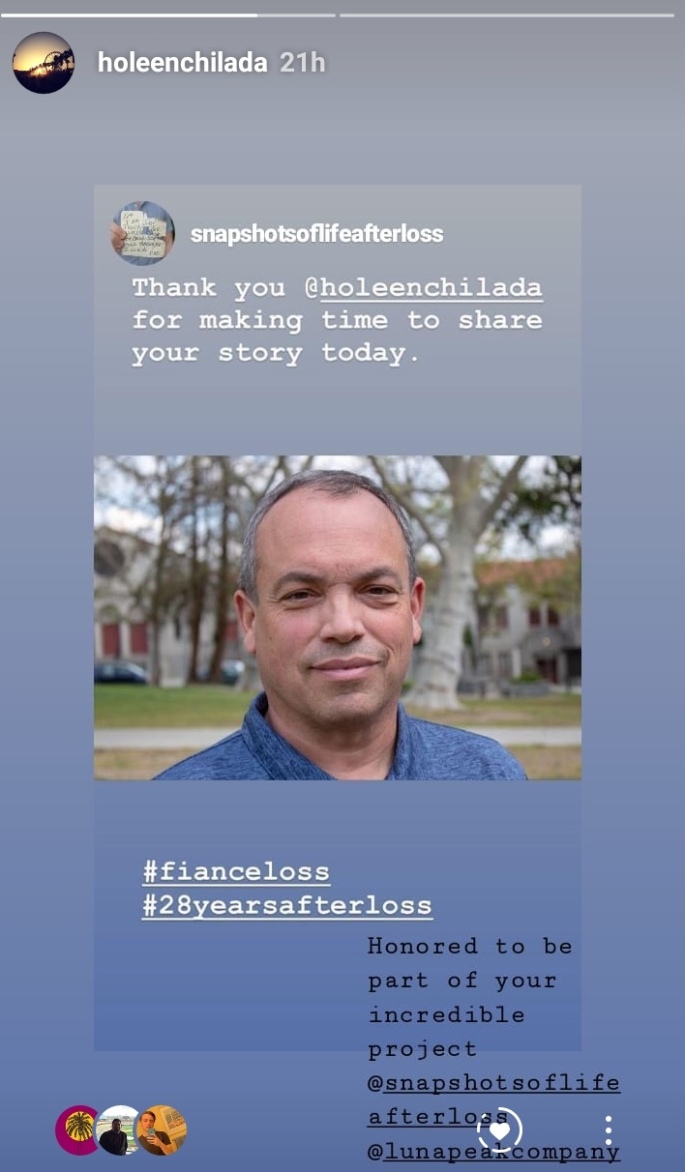